I walked up to the door, not quite knowing what to expect. I had rushed over there from my co-working space to participate in the RailsBridge Friday night install-fest. I buzzed and was let in.

RailsBridge started a few years ago in the wake of a particularly controversial talk at GoGaRuCo entitled “CouchDB + Ruby: Perform like a Pr0n star,” which featured sexually suggestive images of women throughout the talk. It was a well-intentioned but utterly tone-deaf attempt at levity. The resulting controversy required many among the Rails community to question how welcome we are to women and other groups that don’t fit into the classic white male culture (a question that haunts most technical and science fields, including my original study, Physics). RailsBridge was born from this self-reflection, with the goal to reach out to groups of people not usually represented in the programming community. The organization runs a website that provides tutorials, materials, and connections to people looking to run outreach programs in their area. 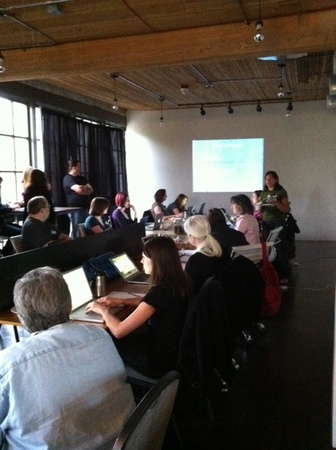 The Seattle RailsBridge was my first experience with the program. I had signed up to volunteer as a TA after seeing the event posted on Meetup.com. On Friday evening we gathered for an “install-fest” which was a night dedicated to getting one’s computer set up and ready to develop with Ruby on Rails. It’s a task which can be surprisingly (and disappointingly) arduous, though the great Ryan Davis was there, providing an automated install script to ease the pain a bit. There were about 25 women there with a range of experience in computer programming. There were also a surprising number of TAs and pizzas. I wish someone had told me about the pizza.

The next day was a full Saturday devoted to working through a tutorial created especially for the Seattle RailsBridge group. It walked the students through the setup and deployment of an entire Rails project, including Git for version control and Heroku for hosting. The total number of students numbered near 35 and were split between two rooms. There were so many TAs that we had to jostle each other to get to a student first to answer their question.

So much of what I love about the Rails community was expressed there: the incredible energy and motivation that the framework brings out in people, the friendliness, the general laid-back attitude of the TAs, the fact that the experience exists at all. It was a great time, and a rewarding experience.

I’m hoping that many more of these spring up around the country, and work to bring even more people into the Rails community.